Leah is the women behind the Molly cardigan from Palava. We caught up with Leah as she shares her experiences working with British wool.

How did you start out in this industry?

I studied English at university, but I’ve always been very interested in making and after I graduated, I studied tailoring. I’ve always been fascinated by beautiful craftsmanship! My interest in British knitwear originated from me wanting to start working in the most sustainable way possible. Wool is the only material used in clothing that we have a long established industry for in this country. I started looking into what we could make from British wool, and why things weren’t being made from wool. I started a quest to make some high-end garments from British wool!

The idea of working in fashion never appealed to me. I’m interested in the making process, craftsmanship and creating beautiful things. It was when I moved to London that I really realised how much was out there for me to do with my transferable skills. It takes a while to find where your place is. 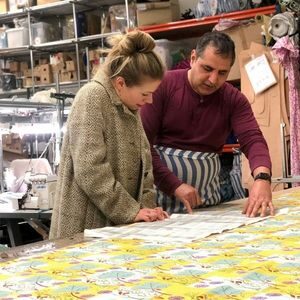 What do you love about British wool?

The biggest thing I love about British wool is how sustainable it is. We could go abroad and get merino wool, for example, and arguably it would be finer and softer than British wool. But there is something really special about seeing what our country can produce. It’s so important to keep our carbon footprint down. For the Molly cardigan, there was a radius of only 60 miles. The further you look into the fashion industry, the more you start picking things apart, the more you see how horrifying the transportation process is. The idea of keeping things small feels good from a moral perspective. The fashion industry is so destructive. It feels good to support British manufacturing which has taken a battering over the past 40 years.

I wasn’t totally sure that this route would be possible – people were very dismissive for a long time. There’s been so little investment in British wool because people view it as a very coarse material. But now we get to make really beautiful things from it! 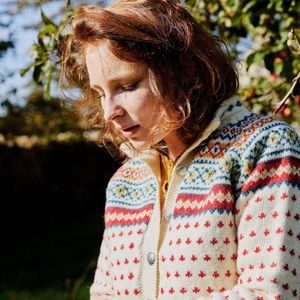 Are there any particular challenges of being a woman in your industry?

Yes! I have been dismissed and written off. I had the idea for the project, and I went to trade shows. I was talked down to by owners of factories who were all men. There’s a real problem with disillusionment in the industry because of what British manufacturing has suffered. I was in my 20s when I was trying to get this going but I needed to meet someone who was willing to feel as excited as I was about British wool, but I was dismissed every single time. This was most definitely to do with being a young woman and for wanting change. I was told to use the imported materials. I was dismissed for jumping on the ‘eco band-wagon’ which was completely infuriating. It’s been so difficult to convince manufacturers that there’s something in this because they feel so jaded by the industry. But this makes it all the more rewarding when you actually get somewhere!

What gets you up in the morning?

When you are a champion of something and believe in what you’re doing there’s no other option! I have such conviction about this work and about British wool. We believe in every element of our work – we don’t take shortcuts. There are no smoke and mirrors. This makes what we’re doing easy to believe in and to talk about.

Along the way, you meet people who suddenly understand you. It’s a case of knocking on every single door and you finally discover you’re not talking to a brick wall anymore. That team belief is so motivational.

The more I learn about Palava, the more I realise how above and beyond we go as a company.

What helps us to keep going is the customer feedback we receive about the cardigans! It was a huge gamble for us because of the price difference but the feedback and the growth are relentlessly positive. 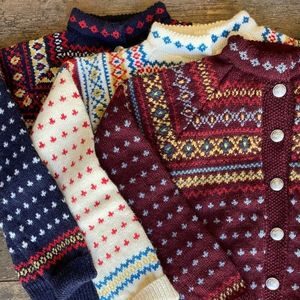 Could you tell me about someone who inspires you in everyday life?

For me, having the support of Bryony, who runs Palava, has been huge in my life. She has been someone who champions British manufacturing and has made things possible for me and for this project. She has been pivotal from a personal perspective. She’s put that faith in me to make this project work.

If you could give one piece of advice to women starting out in this industry, what would it be?

Go to trade shows and speak to as many people as possible. The more people you speak to, the better chance you have of gaining insight and perspective. Trade shows are where I met the people who’ve made this project possible.

People who believe in these things are very willing to talk about them. The more people who do this and push forward, the more other people will learn to help! If you don’t have connections, trade shows are the way to go. Persistence is key!