Got Out of the Wrong Side of the Bed? 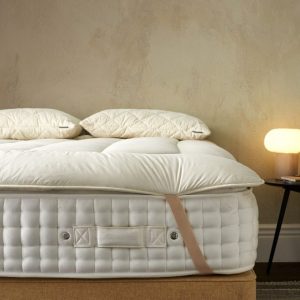 New research has taken a deep dive into the nation’s sleeping habits. Revealing that just 18% of people who sleep on their right claim to be “out like a light” as soon as their head hits the pillow, compared to 21% of left side sleepers. And according to the report, as many as 32% of those who sleep on the right side claim they routinely wake up feeling exhausted, in comparison to just 27% of left side sleepers.

Right hand sleepers are also generally less likely to look on the bright side of life. With just 38% saying they have a good sense of humour, compared to 43% for left side sleepers.

The research, commissioned by ourselves at British Wool, found that on average, Brits wake up at least 3 times a night. And when it comes to what keeps us up at night, almost half of Britons (48%) struggle to switch their brain off. While 46% end up feeling too hot and bothered in bed.

A third also find themselves getting anxious about money. While 22% worry about work and what they need to do at the office the following morning. 48% of the right siders surveyed complained of getting too hot in the night, while just 40% of left siders said the same. One in ten admit they find their bedding to be so uncomfortable it stops them falling asleep. While 10% of women are kept awake by menopausal symptoms. 14% of those polled had down in their duvets, 13% feathers, 11% wool – and a third (33%) were unsure of what their bedding consists of. And eight in ten (81%) had NO idea that using wool duvets, pillows, toppers, mattresses and blankets can help regulate the body’s changing temperature, and therefore help with sleep.

Julia Robinson, Head of Sleep at British Wool, which commissioned the research said:

“From the research we can see that Brits are creatures of habit when it comes to sleeping. Meaning that, sleepless nights and hourly wake ups seem to common place for a lot of us – especially right sided sleepers.”

“Making small changes, like using wool bedding, can help to aid night sweats as wool helps regulate your body temperature. The wool fibres breathe naturally, absorbing moisture from the atmosphere and then releasing it when it’s drier, resulting in better and longer sleep.”

Overall, the research, suggests that eight in ten Britons (78%) always insist on sleeping on the same side of the bed each night. The study also revealed that Britain is a home to a nation of night owls. With six in ten Brits admitting they go to bed late and like to sleep in, compared to 40% who describe themselves as morning larks. And it’s clear that the UK has plenty of snorers, almost two thirds of the 1,500 Brits polled (62%) confessing that they snore at night. With 12% admitting they do it all the time.

“Wool bedding has proven to be life changing for bad sleepers and particularly for those going through changes like the menopause which can result in hot flushes, night sweats and a lack of sleep, making them feel exhausted all the time.”

“It’s shocking that a third of people aren’t even aware of what they’re bedding is made of, when such a simple change could result in a much better night’s sleep no matter what side of the bed you sleep on.”

It’s hardly surprising that having a partner who snores is the number one complaint Britons have about their other half. Almost four in ten (38%) admitting that their snoring drives them up the wall. Meanwhile 22% confess that their partner’s secret talent at sleeping no matter where they are also grinds their gears. And a fifth admitting they also can’t stand it when they steal the duvet.